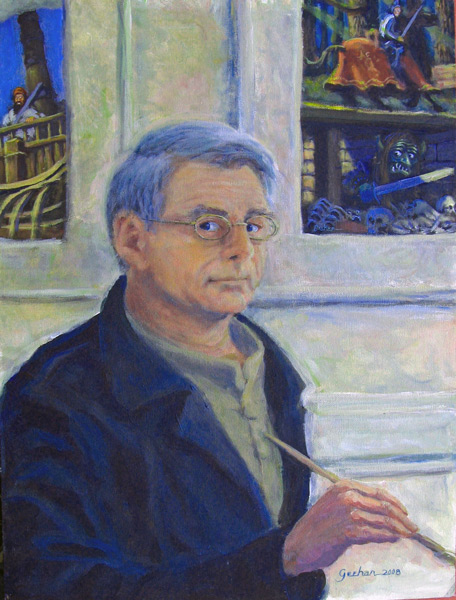 I grew up in Manchester, Connecticut, on a street with lots of kids. We always had plenty to do. We played sandlot baseball, cowboys and Indians, made forts and tree houses, made up clubs, played kick the can, capture the flag, and just about any other game that you can think of. During my down time I used to spend hours in the library, going through the stacks and finding beautifully illustrated books to take home and read. Great times, great memories, and great artistic fertilizer.

I must admit, I did not always want to be an artist. However, I did like to draw and I could draw better than most kids in my neighborhood. At the age of ten I thought that traipsing through jungles searching for ancient ruins, digging for dinosaur bones, or looking for pirate treasure, would be far more exciting. I am sure that I was influenced by all of those Tarzan movies I used to see almost every week on our black and white TV. In my neighborhood Johnny Weissmuller was a house-hold name.

In high school I knew that being an artist was a profession that I would go into. Plus the fact that in 1965, a male had two choices after graduation, be drafted by Uncle Sam, or go to a school of higher learning. I decided on higher learning. My lack of math skills had definitely put a roadblock to any chance of success in the sciences. So upon graduation I moved to Boston where I enrolled in The Art Institute of Boston, an art school that primarily taught advertising design, and illustration.

Uncle Sam greeted me with open arms after graduating art school; he even gave me an all expense paid trip to an Asian country. What a guy!

When I came back from “vacation,” I moved back to Boston where I felt that there would be better job opportunities than in Hartford, and more importantly, Boston was were my girlfriend lived. I soon found a job in the art field, a company that produced jigsaw puzzles and games, and I am still married to that same girlfriend that I met in Boston.

My early childhood and young adult years nutured my imagination. My early years of employment in publishing gave me a solid foundation to advance my art. I have been a freelance artist for thirty years. For the first fifteen years I have illustrated jigsaw puzzles, games, book covers, and fantasy and science fiction stories. The second fifteen years I have been illustrating children’s books for various publishers.

My first venture into children’s books was to illustrate three literary classics for Troll Associates, Twenty Thousand Leagues Under the Sea, Journey to the Center of the Earth, and Men of Iron. I have illustrated the successful Sir Cumference, Math Adventure books, published for Charlesbridge Publishing, Watertown, MA. So far I have illustrated seven children’s books for Charlesbridge. I designed and wrote four children’s mystery stories that includes jigsaw puzzles for bePuzzled, a division of Lombard Marketing, CT. Along with my illustration work, I have been painting sets for a number of theatre productions in my town and surrounding communities.

By looking at my portfolio, you can see that I have fulfilled my young yearnings of searching for ancient ruins, digging for dinosaur bones, and looking for pirate treasure. I have fulfilled those yearnings, and more with my paint brush, paint, and canvas.

I am an artist member of the Society of Children’s Book Writers and Illustrators, the Picture Book Artist Association, the Society of Illustrators, and the Mystery Writers of America. My biography appears in Something About the Author, a reference book that describes the lives and work of children’s book authors and illustrators.

I live with my wife (and still my girlfriend) Susan, and four children in Acton, Massachusetts.